HUNTERSVILLE, N.C. (Golf Course Review) — Skybrook has done a fantastic job with the golf course over the last few years and has turned it into one of the better courses in the Charlotte area.  This is the first time we had the opportunity to play since they closed the course for a few months in 2019 to completely renovate the fairways and redo the greens with Bermuda grass.

The layout of Skybrook is fun and challenging, and it’s always been this way.  Between the layout and now pristine conditions, it makes for some of the best golf around.

The greens took a few holes to get used to, as they were extremely hard and quicker than any other course that we played so far this year.  Even those 2-3-foot putts were by no means automatic.  The approach shots were hard to stick so use less club and expect the balls to roll out.  You’ll want to get there early to spend some time on the putting green before your round.

The course has a lot of elevation changes and plays like a mountain course with several blind shots, hazards, and bunkers.

Taking precaution with the coronavirus, they’ve spaced out tee times by 15 minutes, which allowed us to finish the round in around 3 hours!  You wont regret booking your tee time today.

It’s always a fun time getting out here and we plan to play here more often.  The club is highly engaged on all social media platforms with a very loyal following from its members. 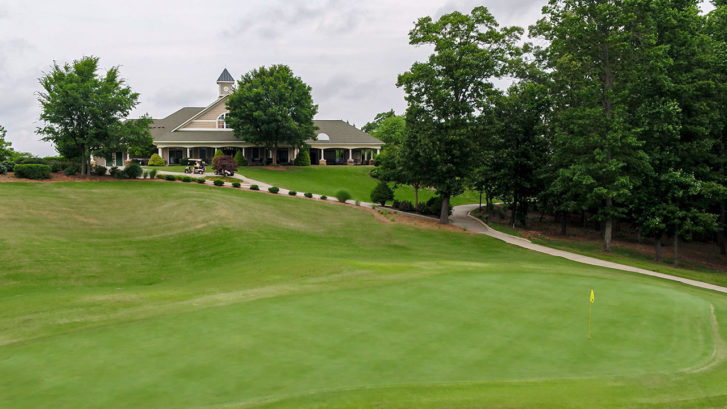 CHARLOTTE, N.C. (News Release) — Skybrook Golf Club was initially designed to be one of the premier golf courses in the Charlotte area. However, poor management, market fluctuations, and lack luster ownership over the past 15 years had slowly let this gem of a course become unpolished and in need of serious repair.

In addition, uncertainty regarding the course’s future put a cloud over all 1,153 homes; and there was real concern over their future home values. A real estate packet, distributed by the golf course owners, offered the facility as a course or possibly separating it into 8 parcels of development land. This sparked the community into action. Craig Sandhaus, HOA President, said “When I saw that packet, I knew I couldn’t let this happen to our community.

Developing some of the golf course property and letting the rest go brown would be disastrous. So, I reached out to my ‘Dream Team’ and asked them if they could help.” Sandhaus’s first call was to DR Bryan and John Coley, Principals at Bryan Properties. They are the original developer of Skybrook and continue to develop land in the area; and Sandhaus knew they have a vested interest in Skybrook. Then he contacted Kim Worrel and David Taylor who own the Charlotte-based, Pinnacle Golf Properties. Their firm was hired 2 years ago by the owner to operate the facility and have gained tremendous support from the residents with all the positive changes at the course despite limited financial support. “Pinnacle has worked miracles with the course since their arrival; and they have incredible expertise.” Sandhaus concluded. He met with all four members and knew they were the perfect group to save the community from this potential catastrophe. Soon after, the four members formed Skybrook Golf, LLC and initiated an effort to purchase the course.

After months of negotiation and deliberation, the former ownership agreed to sell the course to Skybrook Golf, LLC. Sandhaus now had his Dream Team, but the work was just beginning. After 10+ years of neglected capital improvements, the new ownership knew it would be an uphill battle to bring the course back to the level it once was. However, they put a plan in place to improve the course, including re-grassing the greens to mini-verde Bermuda, and renovating the clubhouse to jumpstart the recovery process. The new ownership group met with Sandhaus and asked for help from the Skybrook community. An annual subsidy of $150,000 a year for the next 10 years would help speed up the rebuilding process, and in exchange the owners offered a protective covenant that would secure the golf course remain a golf course for the duration of the 10-year agreement.

Sandhaus brought the idea to the board and they unanimously decided to bring it to a vote. It would take a vote of 75% of all 1,153 residents to pass the amendment which seemed a daunting task. Holding community meetings, recruiting block captains, posting signage, and addressing social media fueled the movement as the community raced to reach the 865 votes required for it to pass. A multitude of Group and One-to-One discussions were had between homeowners to illuminate the benefits of the partnership on home values, safety, and security of having the golf course remain a community asset. Word started to spread like wildfire throughout the community. In just one month from introducing the amendment, the community secured 80% Yes votes (923 votes) and gained approval. “I have never seen anything like what just happened at Skybrook.” says Susan Rouanzion of Cedar Management, which oversees the Skybrook HOA. “This entire community literally came together overnight to support the golf course.”

“Skybrook Golf Club has some of the best bones in the area. Now, with the HOA support, we can expediate many of the capital improvements projects and recover the course from the years of deferred maintenance. It is a new day at Skybrook, and there is no doubt the course will quickly return to the top ranks in the area.”-David Taylor, Skybrook Golf. “We are proud to be associated with such an incredible community”.

The golf course has closed for 10 weeks to work on its renovation projects. It will be renovating the clubhouse, re-grassing the greens with a mini-verde Bermuda grass, improving drainage issues and repairing cart paths. All projects are being posted and updated on their Facebook and Instagram pages (@skybrookgolf). 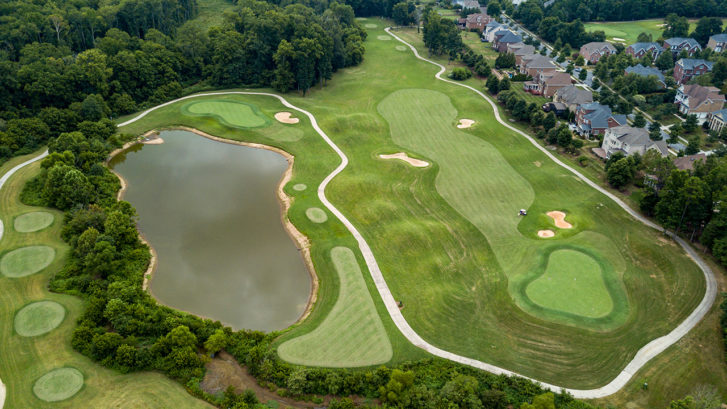 It is a new day at Skybrook Golf Club and the surrounding community in Huntersville, N.C.

The Charlotte-area course was on the verge of closing, and surrounding property owners were worried it would hurt property values by as much as 30%. The club, which had been developed by Bryan Properties and once been one of the gems in the region, had slowly deteriorated under new ownership.

The owners were out of money and willing to sell to anyone. They distributed a real estate packet offering the facility as a course or separating it into eight parcels of developable land.

Craig Sandhaus, Skybrook HOA President, sprang into action when he learned of their plans.

“We will fight if [the former owners] have to rezone,” he said. “When I saw that packet, I knew I couldn’t let this happen to our community. Developing some of the golf course property and letting the rest go brown would be disastrous.”

Sandhaus rallied together his “dream team” — Bryan and John Coley from Bryan Properties, and David Taylor and Kim Worrel, managing partners at Pinnacle Golf Management, who had been managing the course for the prior two years.

They formed Skybrook Golf, LLC, and bought the club. But it still needed to make improvements to make up for 15 years of neglect. Skybrook Golf, LLC came up with a plan to drastically improve the course including re-grassing the greens to mini-Verde Bermuda and renovating the clubhouse. But to make it happen, it needed the HOA to provide a $150,000 annual subsidy. To get that passed, it needed 75% of the 1,153 residents to approve it.

The team initiated campaign to inform residents about the importance of voting for the subsidy. Skybrook recruited more than 60 block captains to knock on doors. It held community meetings and posted signs to advocate for the golf course as an asset to the community.

The amendment received 80% approval in less then four weeks. Sandhaus said the percentage would have been higher if they hadn’t stopped while they were ahead.

“I have never seen anything like what just happened at Skybrook,” Susan Rouanzion of Cedar Management, which oversees the Skybrook HOA. “This entire community literally came together overnight to support the golf course.”

Taylor was surprised with the positive involvement from the community.

“Skybrook Golf Club has some of the best bones in the area,” he said. “Now, with the HOA support, we can expedite many of the capital improvement projects and recover the course from the years of deferred maintenance. It is a new day at Skybrook, and there is no doubt the course will quickly return to the top ranks in the area.”

Taylor said he hopes Skybrook’s success story will serve as a model for other clubs on the brink of closing.